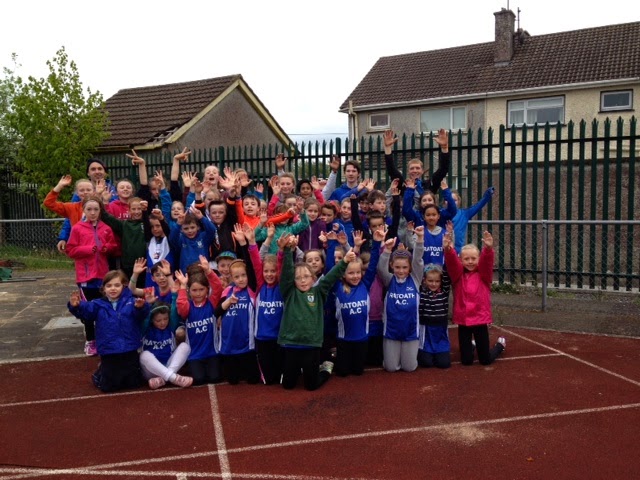 Day2 of the Meath Inter Club League was held last Wednesday at Claremont Stadium, Navan. We have a great turnout on the night with over 50 athletes competing. Some of the highlight performances on the night came from Lili O’ Connor who did the double winning the girl’s u12 high jump and 300m, Caoimhe Fitzsimons and Erin O’ Reilly were 1st and 2nd in the girl’s u9 long jump. Sophie O’ Connor won the girls u13 shot putt, Karen Hayes won the girls u14 800m comfortably and Aimee Doherty had a good win in the u11 300m. Sophie Quinn and Laura Kelly finished 2nd and 3rd in the girls u10 300m, Matthew Buckley was an impressive winner of the boys u13 600m, Tom Kilgannon had to dig deep to win the boys u11 300m by a whisker. Fionn Drummond finished 3rd in the boys u11 300m and Cian Crawford and Christoher Dunne were 3rd and 4th in the boys u10 300m. In the ball throw Niamh Murray won the girls u10 event, Laura Kelly was 2nd and Harry O Connor finished 3rd in the boys event.  Great credit to Aine O Connor who won the girl’s u16 1500m, this was after already competing in the North Leinster Schools mile earlier in the day where she finished 3rd. In the Masters Hugh Kelly won the 800m, Henry Flemming finished 6th, and Bernie Roche finished 4th in the women’s race. Thanks to all athletes and parents who came out to support the club on the night. Day 3 will take place again in Claremont Stadium, Navan on Wednesday May 28th at 7pm.
Posted by Peter Doherty at 2:14 PM