The adult training session has been cancelled tonight due to the unavailability of a number of our coaches. Back to normal next Monday.
Posted by Peter Doherty at 2:44 PM No comments:

A total of 35 mobile phones were donated in the first week of our Fones4Life appeal - that's exactly 10% of our overall target. Ciaran McCarthy  showed just what can be done when he dropped in 7 phones and got us off to a great start but we need every club member to get involved and do their bit. Remember the collection box is in the club container. We also plan to provide another collection box in the school gym for Little Athletic participants
Posted by GFinnegan at 12:37 PM No comments:


2K & 5K Event
10.30am/11.15am
Saturday 08th November
Fairyhouse Race Course
This is a FREE event exclusively for members of Ratoath AC only. This event is NOT open to the public. Participants will be timed, use of facilities and plenty of parking on the morning.
This is open to all club members ranging from the young to the not so young ;). Parents/guardians please ensure your child is capable of completing the distance.  Any senior/F4L members who wish to run with their young children please run in the 2k event.
We are looking forward to seeing you there, loads of time to get in those training runs!!
—

running.
Posted by Ratoath AC at 4:40 PM No comments:

The club has set an initial target of  350 old mobile phones which can then be exchanged for a defibrillator.

A collection box will be placed in the club container so start gathering up all those old unwanted mobile phones you have at home. Don't forget to also ask your school mates or work colleagues for help. All mobile phones, regardless of their make, model or condition are acceptable but get permission from the original owner before you donate.

In the event that our target of 350 mobile phones is exceeded there are further sports equipment and cash back incentives to be earned.

If every club member donates just 1 phone, the club will reach the target of 350 mobile phones in no time. Its a win win opportunity - you get rid of some unwanted phones and the club gets some vital equipment that might be needed to save a life. So lets get cracking.
Posted by GFinnegan at 12:13 PM No comments: 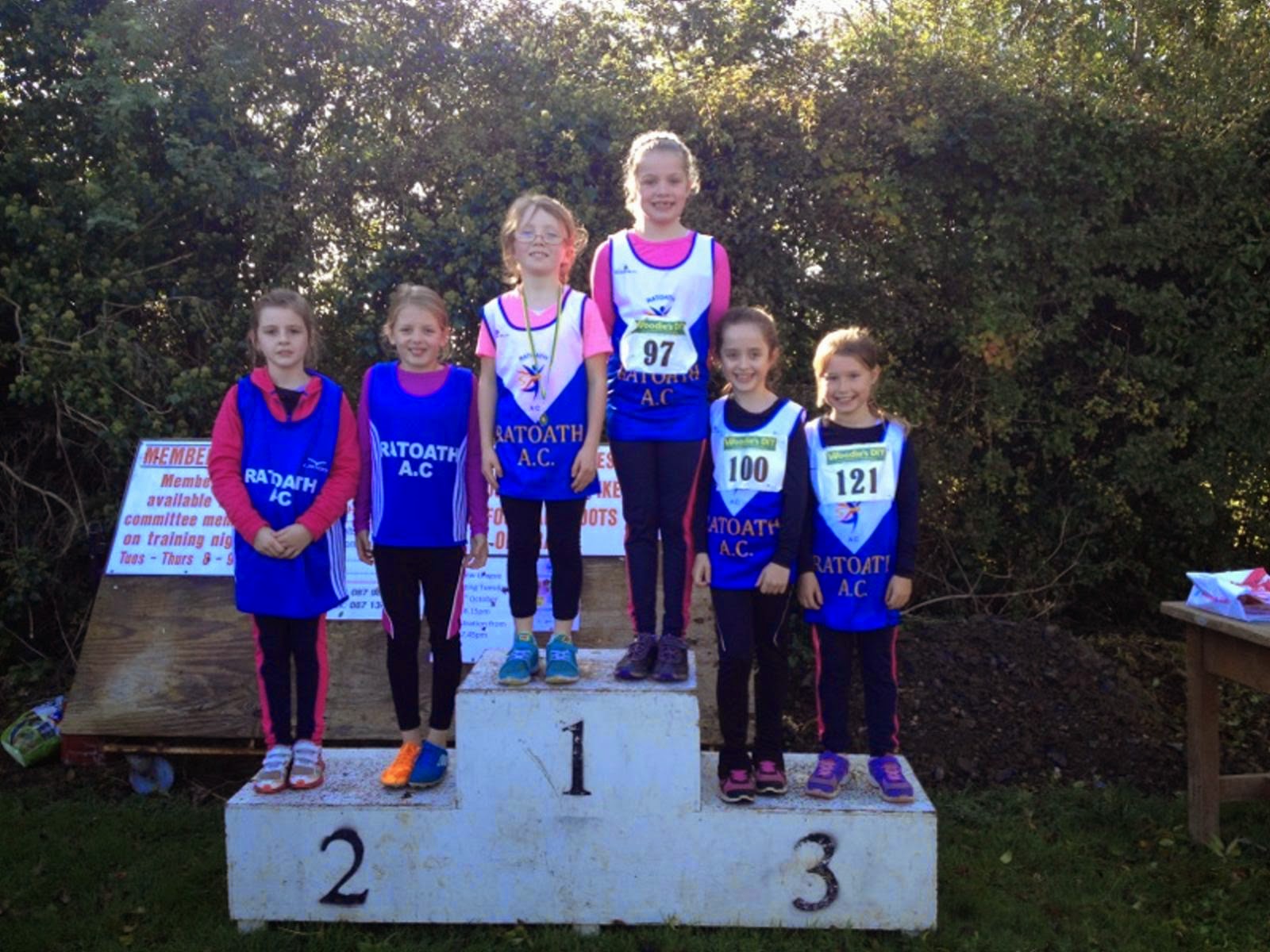 The Meath Un-Even ages cross country took place last Sunday at Fr. Murphy’s Athletic Club, we were blessed again with good weather and we had another great turnout from the club. The u 9 team were competing for their first time and they got off to a winning start bringing home the gold in the girl’s u9 team event with great performances form Ciara Coroner 1st, Cara O’ Sullivan 5th, Caoimhe Fitzsimons 6th, Jane Dolan 9th, Kate Raftery 10th and Caroline Byrne 23rd. We were unable to field an u9 boys’ team; Gerard Leavy being our only competitor putting in a great run finishing 7th.


More gold was on the way with both our u11 boys and girls teams winning their respective team events, In the largest field of the day with 60 athletes competing Aimee Doherty, Sophie Quinn and Eabha Toole all made the podium finishing 1st, 2nd, and 3rd, Laura Kelly 11th, Molly Keane 12th, Amelia Campbell 13th, Matilda Ruhan 15th, Ciara Subiran Walsh in her first cross country had a great run in 25th, Niamh Murray 39th, Ellie Mahon 51st, Lily Nannery 45th, Aoife Casey 50th, Rachel Conway 52nd and Sophie Greene 55th. The boy’s team were in great form and in another large field Fionn Drummond finished strongly to take silver, Harry O’ Connor finished 4th with a powerful sprint on the run in, Eoin Kane put in another great performance finishing 5th, Kyle Witter who put in a confident run and was in the leading group of 3 for most of the race finished 6th with Kevin Sommerfield Walsh competing in his first championship finishing 17th.


The u13 teams were down a few of their regular athletes but put in good performances none the less with both girls and boys teams finishing 3rd. Ella Healy had a another solid run finishing 4th for the girls followed by Lili O’ Connor 12th, Sophie O’ Connor 20th, Emma Coroner 28th and Kate Smith 35th. Oisin Kelly has really taken to cross country and was first home for the boy’s team in 8th, followed by Matthew Buckley 14th and Stephen Kiernan 21st.


Our U15 girls team just finished outside the medals in 4th, Karen Hayes having a great run out of her age group in a highly competitive field finished 4th, Aoife Kelly also running up an age finished 18th with Sophie Dunne 21st. The u15 lads put in a great performance with strong runs from Ciaran Barry 7th, Harry Haskins 8th and Harry Bailey 11th earning them silver in the team event.


Aine O’ Connor had another strong run and claimed her first Meath Cross Country title in the girl’s u17 race, Amber Roche had a good run also finishing 4th, unfortunately the girls were one athlete short of making up team and so we were unable to medal in the team event. The u17 boy’s race had a quality field with a number of National title and International title holder taking to the line, Philip Marron and Alex Hunter who are just getting back to form put in steady performances finishing 4th and 6th  and with Brian Kiernan finishing in 12th place the lads won the team event.


Hugh Kelly was our sole competitor in the intermediate men’s 8k event  and he put in another good run finishing 18th in a very competitive field.


Thanks to all Parents and athletes who attended both days, and congratulations to all athletes who have qualified for the Leinster Championships.


Pictures from the day on the link below:


https://www.youtube.com/watch?feature=player_detailpage&v=qskpCiTtDEQ
Posted by Peter Doherty at 10:14 PM No comments:

The following athletes have been selected for the Meath Uneven Age Cross Country Championships which will take place this Sunday at 12 Noon at Fr.Murphys Athletic Club, Fraine, Athboy. We will be meeting at our track at 10:20am to travel in convoy to this event.

Posted by Peter Doherty at 9:54 PM No comments: 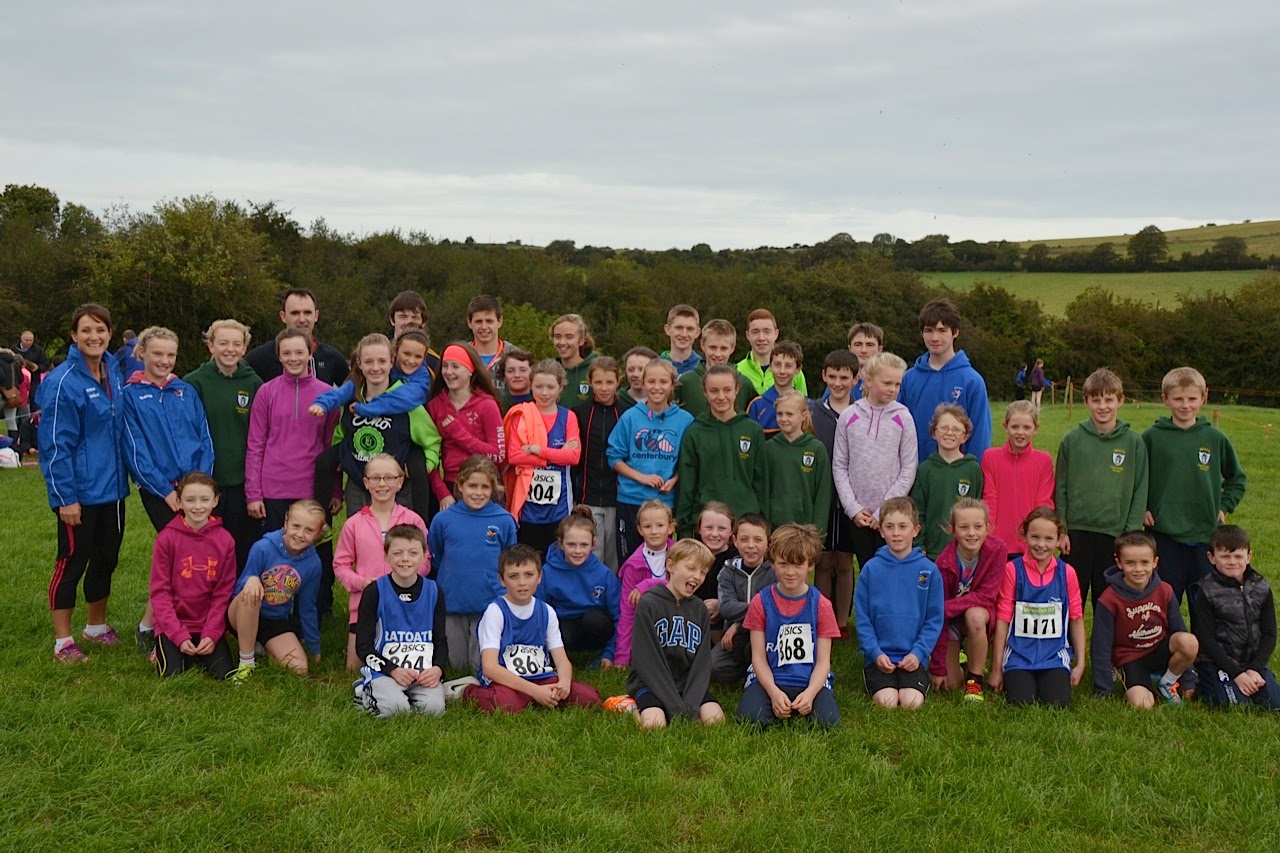 The Meath even ages cross country took place at Greenanstown, Stamullen yesterday. We had a big turnout this year in all age groups with 80 athletes entered. The U10s got the day off to a winning start with gold in the girls u10 team event, some great individual performances came from Sophie Quinn 1st, Laura Kelly 2nd, Niamh Murray, Amy Forde and Lily Nannery. The u10 boys team finished 2nd, Harry O’ Connor and Eoin Kane were impressive individually finishing 1st and 2nd. The u12 girls also took gold in the team event with strong runs from Ella Healy 1st, Lili O Connor 3rd, Eabha Toole 4th, Amelia Campbell, Molly Keane and Grace Mahon. The u12 Boys finished 2nd to a very strong Dunboyne team, Tom Kilgannon finishing 4th, Oisin Kelly had a great run for his first time out finishing 6th, Fionn Drummond 10th, Kyle Witter 11th and Matthew Hayes 13th.
The U14 girls team finished 2nd, Karen Hayes leading the girls home in 3rd, Aoife Kelly another first timer finishing 11th, Rachel Doherty 24th, Maria Rogers 27th, Sophie O’Connor 30th and Emma Coroner 34th. The u14 boys all ran very well and their efforts paid off winning gold in the team event, a great team performance with Harry Haskins finishing 7th, Daragh Casey 11th, Fergal Kilgannon 13th and Matthew Buckley 15th. We had great numbers in the girls u16 event this year and our girls all performed very well, Aine O’Connor going from strength to strength this year finishing 2nd, Niamh Gannon, Kate Byrne, Aoife Reynolds and Jennifer Bradley all competing in their first cross country for the club had solid runs earning them 2nd place in the team event. The boys u16 event had a very strong field this year with International Athletes Paddy Maher, Alan Monaghan and our own Alex Hunter competing. In a tight race Paddy Maher came out on top followed home by Alan Monaghan and Alex Hunter, Ben Mahon running for the club for the first time in a number of years finished in a strong 6th place, unfortunately due to some late withdrawals we were unable to field a team in this event.
Our U18 And Novice men competed in the 6k event, the Novice men’s team were just outside the medals finishing 4th, good performances from Ian Phelan finishing 11th,Hugh Kelly 15th, Earle Doyle 19th and Alan Phelan 21st. Philip Marron, finished 3rd for the u18s, Ciaran McCarty 5th and Ryan O’ Connor 9th, the boys team finishing 2nd overall.
Well done to all our athletes who competed yesterday and congratulations to all who have qualified for the Leinster’s championships which will be held on October 26th in Avondale, Co. Wicklow.


https://www.youtube.com/watch?feature=player_detailpage&v=nSRoiCz_DNQ
Posted by Peter Doherty at 9:40 PM No comments:

LITTLE ATHLETICS will go inside to the secondary school hall from tomorrow night Tuesday the 7th of October, training times will remain the same U6/U7- 6:15pm -7pm and U8- 7pm – 7:45pm.