Meath County Championship info for under 9-under 13

Day 4 is Wednesday 18th May

For U 9 and u 10 enteries email pdoh@eircom.net

Posted by Ratoath AC at 3:47 AM No comments:

Community Games Mon 2nd May at 5pm at the Track

Finals of events 1-6 if required.

Finals of events 11-16 if required

Posted by Ratoath AC at 3:03 AM No comments:


Meath Track & Field Championships
See below documents for details of Meath Championships and summer league.
Please note that in order to compete, you must have paid your club annual fees & be registered with the Meath County Board. If it doubt, please check with club secretary.
Championship entry fees are: Juveniles & Juniors €1, Seniors and masters €2 per event.
You need to forward the entry fee and details of events you intend to compete in by Friday 22nd April so that we can pass on to the competitions secretary.
We would like to try and make a big effort to field relay teams for Meath Championships on Wednesday 18th May.
Plan is to do some relay training on Sunday mornings at 11am so pass the word on with a view to making up relay squads of 4 plus 1 sub.
Relevant Documents:
Inter Club Track & Field League 2011
Meath Championships Programme 2011 (spreadsheet, check each tab)
Meath B Championship Programme
IAAF Rule Changes 2009

If you are interested in any of the above, please email the club giving name of athlete and a list of the events that they wish to enter.

Note: Athletes pay their own entries for Meath championships with relays and Leinster entry fees paid by club.
Posted by Eoin at 9:08 PM No comments:

The Royal County 5km takes place on Bank Holiday Monday 2nd May in Kells at 11am with actor Sorcha Furlong, who plays Orla Kirwan in the RTE soap 'Fair City', leading the way.

The event is organised by Meath Local Sports Partnership in association with St. Brigid's Athletic Club and is open to all over 12yrs. It starts and finishes at the Round Tower on Cannon Street.
Meath LSP welcomes all abilities along on the day and particularly would like to see families getting involved. So whether you are a walker, jogger or seasoned runner come along and give it a go.
More information here
Posted by Eoin at 11:24 AM No comments:

For months before this race, when I told people that it was to be my first marathon, not only were they surprised, but some laughed. I didn't let it concern me. My job was to put the training in and do as much preparation beforehand as possible. In hindsight I don't think I would have done very much differently given the same circumstances. I knew it wouldn't be easy, that's why I did it, I enjoy challenges.
Due to a chest infection, I had only been able to get one training run in longer than 30k, but I was really happy physically and mentally about that run, so that was a bonus. I had booked a hotel in Clifden and we made a family weekend of it, driving down the day before. I took it pretty easy and went to the registration and got my race pack. Even before we went to dinner that night I had already got my chip timer on my runner, and my bib number secured to my shirt. There was a pasta party in our hotel, so I took in loads of carbs and calories (three plate fulls of pasta and three deserts to be exact...). I managed to get sporadic sleep, not a full night, but enough. 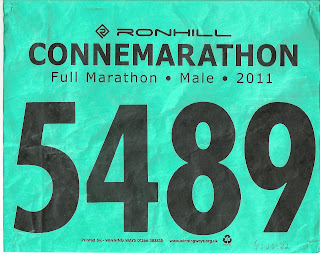 On race day I was up at 07:00 and went down for breakfast. There were a few others there too and everyone seemed pretty quiet and focused. After brekkie I got all my stuff together and went out to the bus to be brought to the start line. It was a 30min bus ride and we got dropped on a road beside a lake with a few hundred others in the middle of nowhere! I bumped into a couple of people I knew and chatted for a few mins. It was chilly and I didn't want to be standing around too long. Just before the start, some of the ultra runners came through, they started 21.1k before us.
We took off and I was very careful not to be caught up in the rush to get away. I kept my pace between 5:45 and 6:00min/k for the first 21k, depending on terrain. I got to the half way mark at 1:58, which I was happy with. I didn't want to be using loads of energy for the first half, knowing that the worst was yet to come.
Then the first hill came at about 24k and it sapped some energy. I rallied but the next 14k was undulating with a mix of sunshine, rain and a sideways wind - pretty sapping. There was an aid station about every 5k. I had brought my hand hald along, so I drank form that and used the water from the aid stations to refill it. The pic below shows the elevation, a total of 2,300 feet gain overall.

Then after 36k we got to the main event, the hill. A.K.A. "The Hell of the West". I could see the road up the hill for a few kms and I saw dozens of people in front, but only a handful running. I ran when I could and walked when I had to. The last 4k was a welcome relif once we were past the hill. 2km down slightly and 2km pretty flat. My family was waiting for me at the finish line and apparently I looked very pale (it was pretty windy and exposed). Official time 4:26:22. This pic is of me about to go over the finish line. 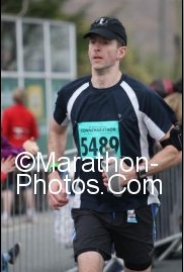 I was hoping for a faster time, but with the big hill at the end it wasn't going to happen.
If you had asked me yesterday if I would do it again next year I would have said a definite NO. Today I may be talked into it. I'll definitely do more marathons etc, but might wait until I have more hill training done to try this one again.
I overheard someone say that they had done this race three times and only managed to run up the hill on the third year...I wouldn't recommend it to someone as their first marathon, but it's a great, friendly and well organised event. We drove the length of the course the following morning and we didn't see one water bottle or gel pack or any signs of the race at all. Great job!
I'm now in recovery mode and may do a short run on Wednesday and build it back up over another week. Time to train for the Kildare half marathon in less than 5 weeks time!