Kildalkey 5 miler (8k)
I did this race last year with my BIL, who is a member of the hosting club (Fr Murphy's AC). I had stomach cramps and had to walk parts and finished in 38:43. This year we had cooler temps (6-8C) and it was raining on and off. This would be my first road race of the year and my longest race since the Dublin HM last September. As I'm only getting back to running, I was hoping to run the whole way and if possible, beat last year's time. As I jogged from the Kildalkey Community Centre to the start line (about 1k) I had a few runners ask me where the start line was. Nice to be the "old dog" at a race!
I did my warmup run and took shelter for a minute under a tree during the rain. Then all 127 of us lined up and headed off on the wet roads and boreens. I'm really getting to like the smaller races, there's a lot of character and friendliness to them. Some of the narrower roads had large puddles the whole width of them. The faster runners would barrel straight through (you could tell who they were at the end due to the mud splashes up to their waist!), but us mid-pack runners ran up on the grass. The pack thinned out pretty quick, and after a while I had two runners in front of me that I never caught or lost. 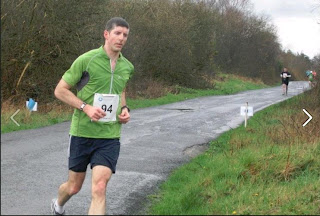 After the 2k mark or so I stopped looking at my garmin and I didn't look at it again until I went over the finish line. As the end of the race drew closer, I could hear the announcer over the PA system, so I brought my pace up a bit. Then I turned a corner and the line was in sight and sprinted the last 50m or so. Going over the line I got 38:10. It would have been good to get under 38mins, but as I was 33sec faster than last year, in worse conditions, I'm quite happy. Great refreshments to be had in the Community Centre afterwards and lots of different clubs in attendance.

Time to prepare for next Sunday's Dunboyne race!

Email ThisBlogThis!Share to TwitterShare to FacebookShare to Pinterest
Labels: kildalkey