On Saturday, I was lucky enough to be able to take part in this one day coaching course. Mickey Ruben is Usain Bolt's Strength and Conditioning coach and is also a Physio in his own right and used to compete in Decathlons.
There were about 70 people there, mainly coaches and runners, but also some footballers and martial artists.
The day started with core exercises. This is a pic of one that was recommended. The athlete is holding two dumbbells (weight not important) and the arms kept wide while staying in that position for 20-30secs. 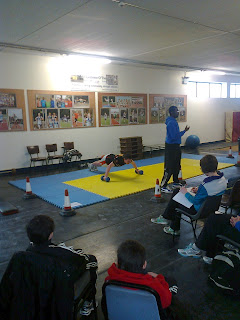 Next we moved on to get a demonstration of the "jack-knife" abs workout - looked tough! 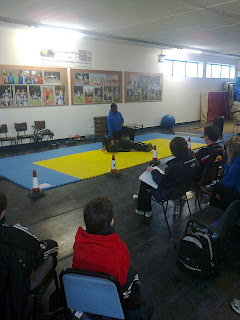 Then we moved on to mobility work, and used some hurdles. The volunteers had to hold the hurdle with both hands and make their way over each one in turn. It's all about getting the hips in the air - which in turn helps with sprints. 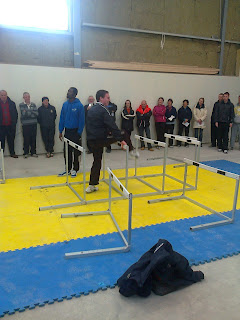 This is an "action shot" of the same hip movement applied to sprint starts: 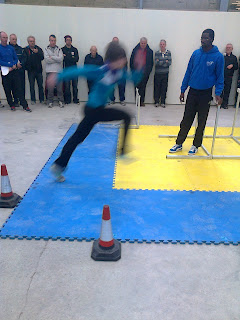 After lunch (which was included in the price), we moved outside to the all weather track for some fine tuning of sprint starts and setting up in the blocks (no pics I'm afraid). Then it was back inside for discussions on warmups, cool downs, shot putt, javelin and a Q & A session.
It was a really packed and worthwhile course and one I'd highly recommend. Many thanks to Carlow AC for hosting the event!
Posted by Eoin at 12:01 PM