Running in Saturday's heats of the national 800m senior championships, Conor Duncan qualified for the final when finishing third in 1 min 54.19 sec. Conor led the field through 400m in 54 sec and then appeared to go through a bad patch before getting a second wind and finishing strongly up the home straight to claim the last qualifying spot. However, the lack of winter training finally caught up with Conor in Sunday's final where he finished 9th in 1 min 55.62 on tired legs

Also competing in the national seniors  was our 4 x 400m relay squad. After his exertions in the 800m final, Conor joined Naoise McKenna, Peter Kilgannon and Brian Kiernan for the last event of the championships.The four lads gave it everything but with the exception of Peter Kilgannon, who posted 50.5 sec for his leg, they were unable to reproduce their early season form and finished 8th in 3 min 29 6 sec. 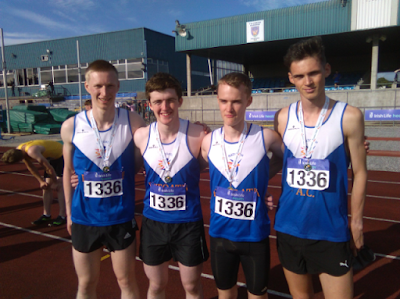 Posted by GFinnegan at 5:42 PM