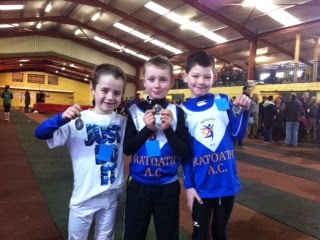 We had a great turnout for the Cushinstown indoor sports at the Weekend with over 30 athletes competing on the day. Our u9 squad got their first taste of competition and made a real impact with great performances in the long jump and 60m sprints with James Kelly, Fionn Heffernan and Charlie O’ Conor placing 1st,2nd and 3rd in both the long jump and 60m sprint, Liam and Conor Walsh also putting in a good performance over 60m.  Katie Doherty had a strong run winning the u9 girls 60m and great running also from Sophie Coroner, Isabel Wallace, Amelia Holland and Molly Moran.
Our 10s girls also featured strongly with Cara O’ Sullivan finishing 2nd in the girls u10 60m, Caoimhe Fitzsimons 4th and Ciara Coroner 5th, good running also from Lauren Fewer. Sophie Quinn finished 3rd in the u11 girls long jump and Laura Kelly finished 4th in the u11 girls 60m final. Harry O’ Connor had a great run to finish 3rd in the boys 60m clocking 9.2s with Eoin Kane also running well in the final. Eabha Toole had a great win in the girls u12 60m with a time of 9.1s and Lili O’ Connor did the double winning the u13 60m and long jump. Emma Coroner took silver in both the girl’s u14 60m and high jump with a great jump of 1.36m, Matthew Buckley got his season off to a great start clocking a new pb in the of 7.76s to win the u14 60m in great style, Ben Toole finished 2nd and Kevin Conway 5th. Darragh Casey had a good run the u15 60m finishing 2nd and in the closest finish of the day Aine Cooney was edged out from gold by 100th of a second finishing 2nd in a time of 8.47s.
Thanks to all who attended and a reminder that we need all our U9-12 athletes out this Sunday for the Mini league in Dunboyne, starting at 12 noon.
Posted by Peter Doherty at 9:56 PM