All Ireland Juvenile Indoor Relays- National Title for U12 Girls 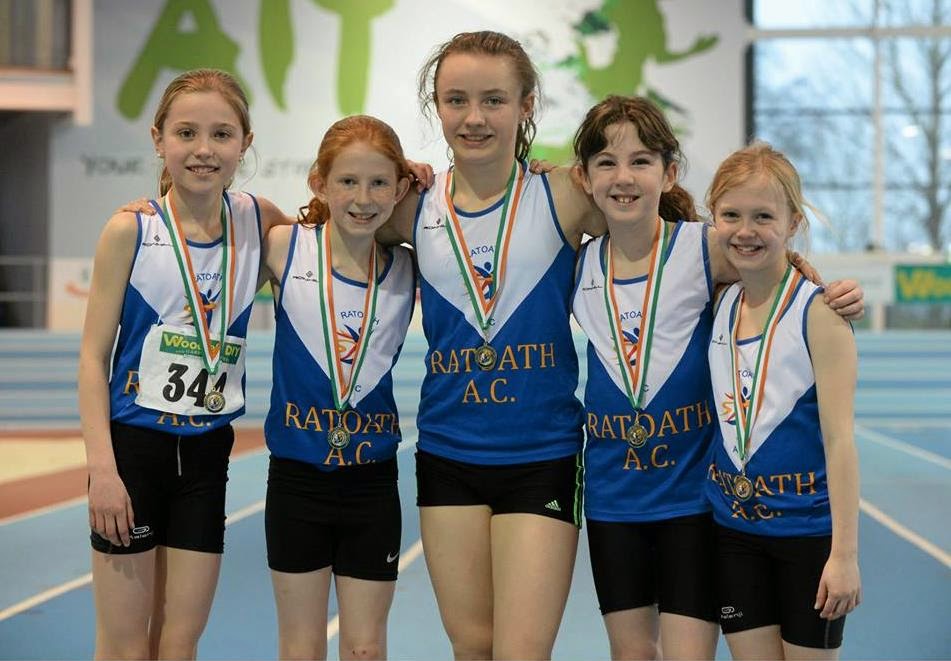 The National Juvenile Indoor Relay Championships took place last Saturday in Athlone. We had 3 teams competing from the club with our boy’s u17 team unable to attend. A large crowd was in attendance with the top clubs from all four provinces and Dublin competing.
Heats
The boys U13 team of Kevin Conway, Matthew Buckley, Brian Kiely and Tom Kilgannon competed in the morning session and were very unfortunate not to qualify from their heat, their time of 56.6s was just 1/10th of a second off a place in the final. This was a pb for the lads and with improved passing they can go even quicker. Our two girl’s teams were on in the afternoon, the girl’s u12 team of Aimee Doherty, Lili O’Connor, Emma O’ Connell, and Ella Healy qualified for the final from heat 2 with a time of 58.4s, Emma having a great 3rd leg run. Their time was again a new pb improving on their Leinster winning time of 58.88s. The U14 girls 4x 200m team of Emma Coroner, Ivie Okome, Karen Hayes and Aine Cooney had a great run in heat 1 finishing 3rd and qualifying for the final with a terrific time of 154.63s, 3 seconds faster than they ran at the Leinster Championships.
Finals
The u14 girls has another good run in the final, but were a little tired from their great effort in the heats, they finished 6th with a time of 1:55.68s, but they will be greatly encouraged by their performance in one of the most competitive age groups. The u12 girls were the second fastest qualifiers from the heats, Dooneen Ac were 1/10th of a second quicker and so the girls were drawn in lane 5 with Dooneen Ac in Lane 6 for the final. The girls got off to a good start with a great run from Aimee Doherty, the changeover to Lili O’Connor was smooth and Lili powered around the bend putting serious pressure on the Dooneen athlete outside her. With another good pass to Aoife Rutherford (Aoife replacing Emma for the final), the girls now had a slight lead, Aoife ran a great bend and was first to break to the inside lane. Aoife improved on the lead slightly and had a good changeover with Ella Healy for the final leg. Ella had a 1-2 m lead heading into the bend, but the Dooneen athlete responded and put Ella under serious pressure on the home straight. Ella kept her cool and with a determined run crossed the finish line to take the Gold with only nine hundreds of a second to spare, winning time 57.81s, Dooneen Ac 2nd in 57.9s and St. Laurence O’ Toole’s 3rd in 58.55s.
This was great day for the club, winning our first ever National Juvenile Indoor Relay Title and great credit must be given to all our athletes who put in a great effort in training in recent weeks. 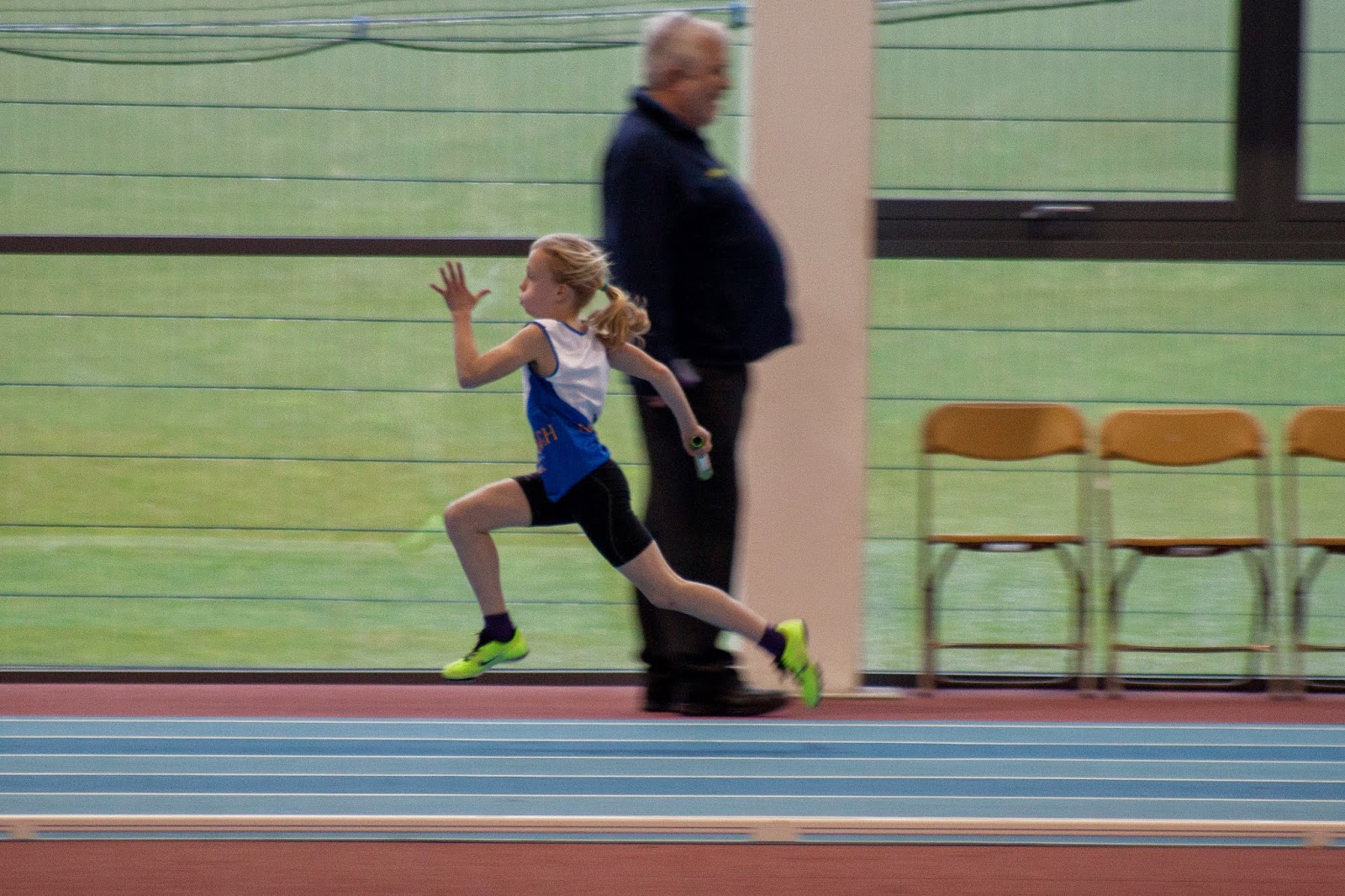 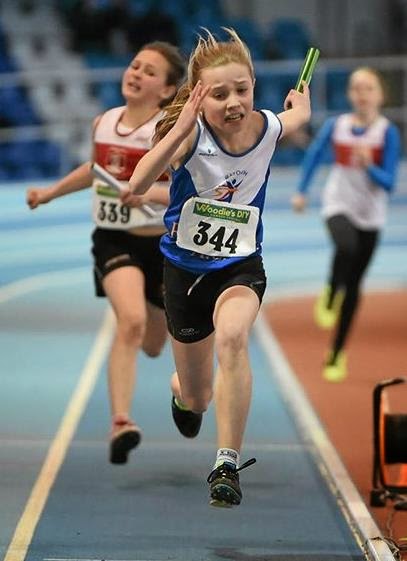 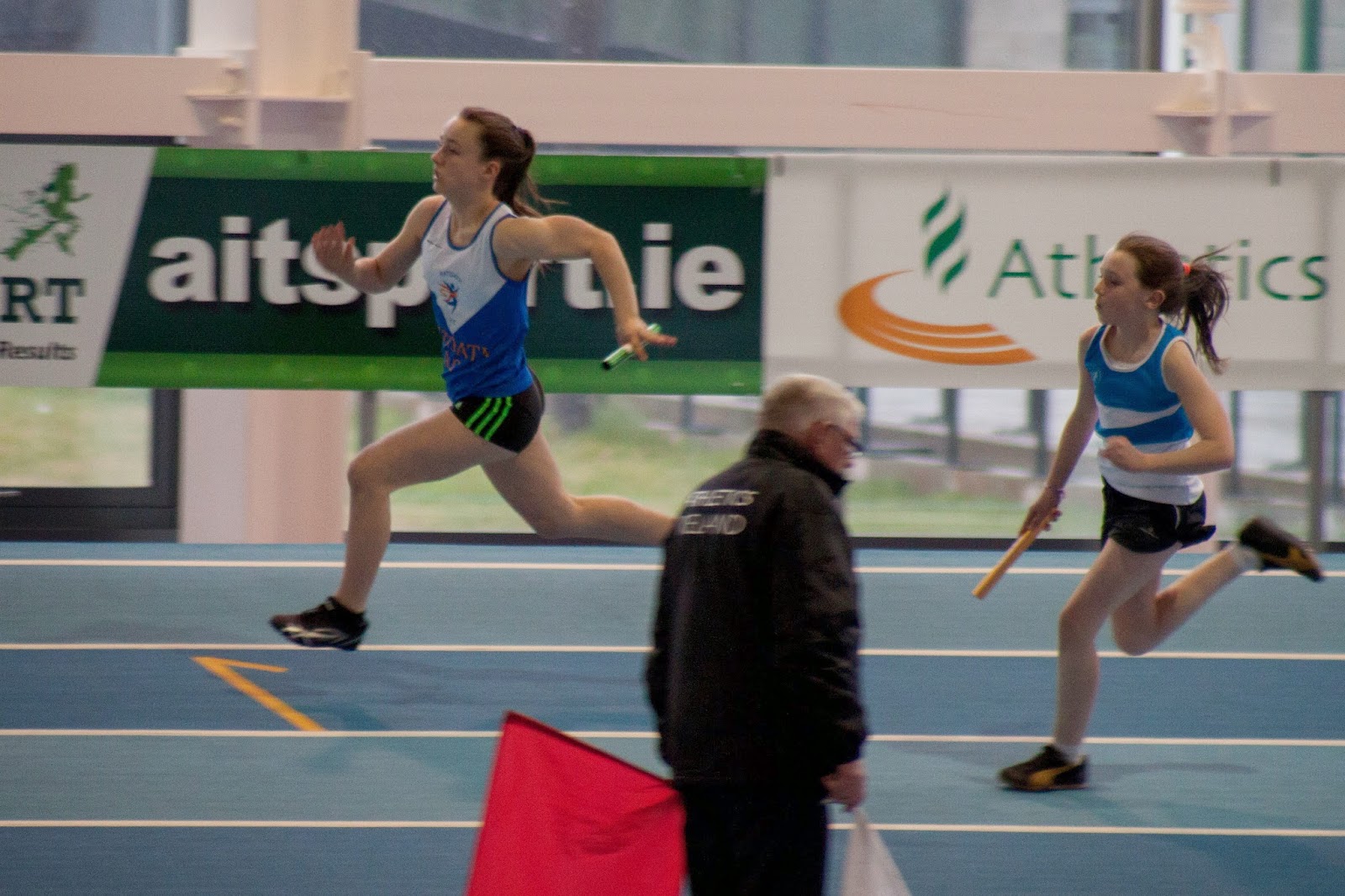 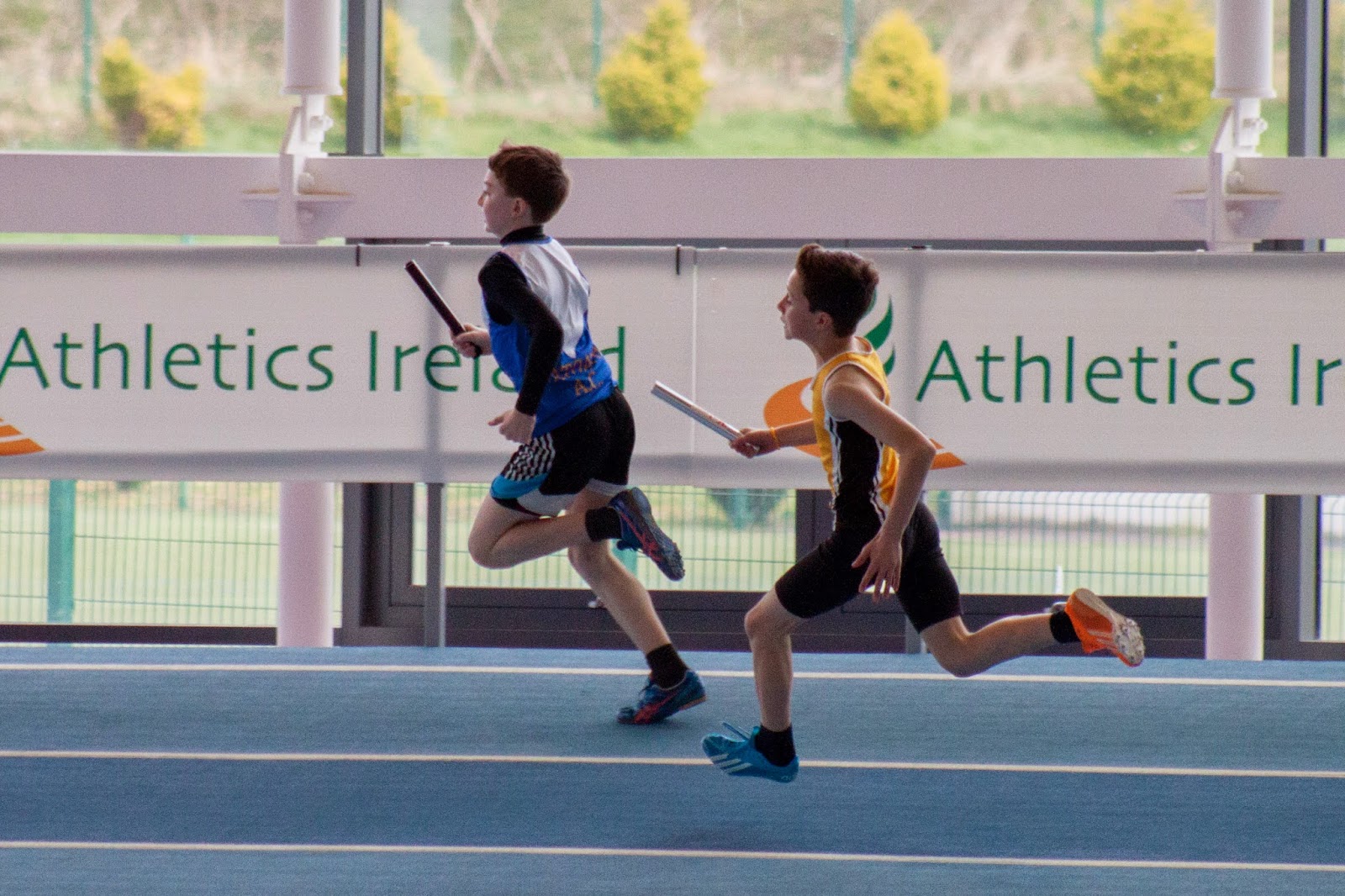 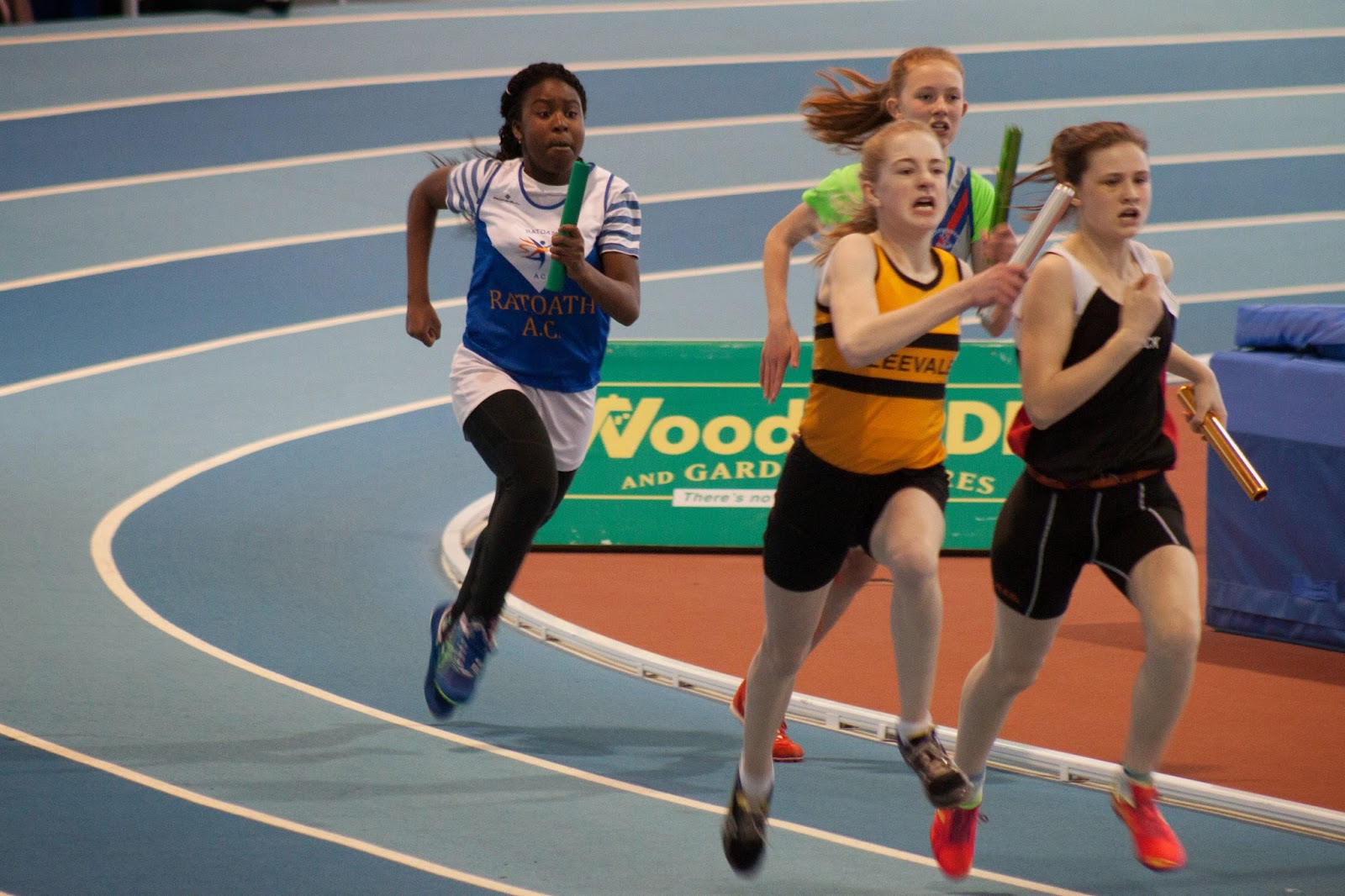 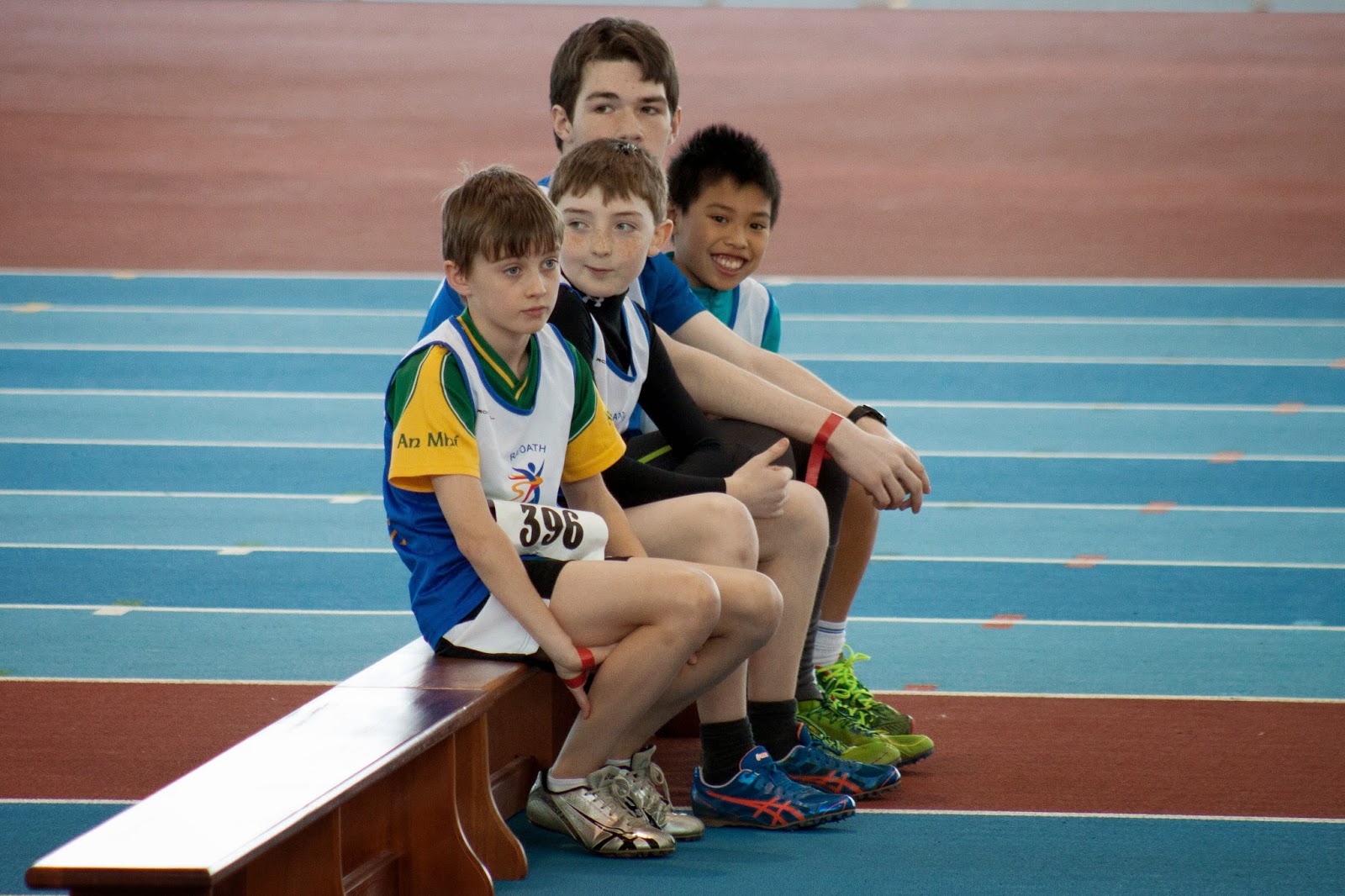 Posted by Peter Doherty at 7:13 PM