Day 3 of the Meath Track and Field Championships took place yesterday at Claremont Stadium, Navan, the weather was a big improvement on last week and we had a good turnout of Athletes again from the club. Again the standard was very high and performances of note were Fionn Drummond who won double gold in the Boys U 9 60m and Boys U9 Long Jump, Fionn had already won Gold in the 500m and Silver in the Ball throw on Day 2, a great all round performances from him. Kyle Witter had a good run also in the final of the Boys U9 60m. Aimee Doherty and Tom Kilgannon put in terrific performances also, Aimee won the Girls U 9 500m and Tom won the boys U 10 500m. We had 3 girls who made it to the final of the girls U10 60m, Ella Healy came third with Aoife Rutherford finishing a close 5th, Ciara Coffey finished 6th. Emma Coroner competing in the ball throw for the first time won silver in the Girls U 11 Ball throw, Lara Power had a good performance winning bronze in the girls U12 Shot Putt. Alex Hunter and Ivan Mather had a good run in the 800m, both winning silver in the boys U14 & U16 800m respectively. Abraham Zaidan won silver in the Junior Men’s 200m and Tom Gannon won bronze in the Boys U18 100m Hurdles. Well done to all Athletes who competed yesterday. Can all club singlet’s be returned on Tuesday evening at training, Thank You. 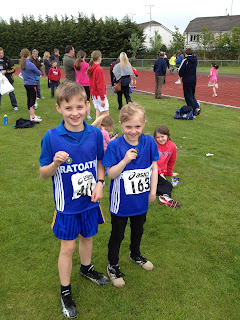