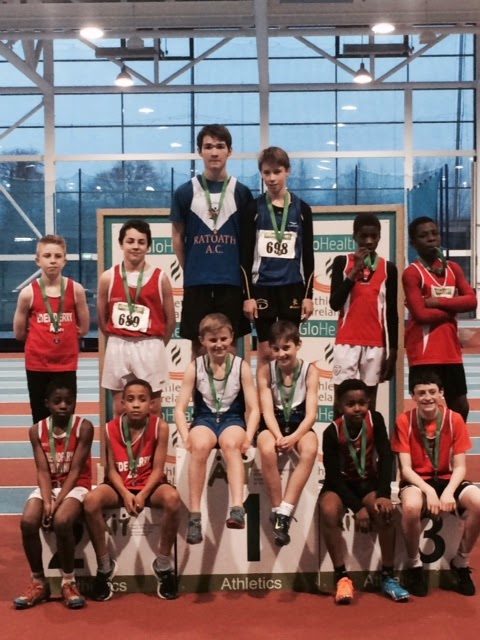 The Leinster indoor juvenile relays took place at the Ait Arena last Saturday and with entries at record levels the competition was fierce and the atmosphere was electric. We had 6 team’s competing on the day u12, 13, 14, &15 girls and u13&14 boys. Our u13 girls took to the track first in heat one of the u13 4 x 100m relay, unfortunately we were only informed of a late change of rules minutes before the event commenced which caused much confusion for all teams competing in the first heat, luckily our girls still managed to qualify for the final finishing 2nd in a time of 58.4s. The girls were much wiser for the final and showed true grit when they stormed to victory from lane 2 in a new Leinster record of 55.92s, congratulations to Lili O’ Connor, Emma O’ Connell, Aimee Doherty, Aoife Rutherford and Ella Healy.  Our u13 boys were up next and they put in a great run to finish 2nd in their heat qualifying them for the final, the lads finished 5th in the final after another good run in what was a very competitive age group. Well done Oisin Kelly, Kyle Witter, Tom Kilgannon and Brian Kiely.
Our u15 girls were impressive winners of their heat with a solid run on the anchor leg by Maria Rogers qualifying them easily for their final with still plenty in the tank. The girls came out with all guns blazing in the final with a scintillating start from Aine Cooney on the first leg, Ivie Okome put in a power run on the 2nd leg and the battle was now on with Laurence O’ Toole’s for gold on the final 2 legs, Emma Coroner and Lara Power pushed them all the way with the girls only narrowly beaten in the end claiming silver.
The Even ages relays were on in the afternoon, Our U12 girls team of Laura Kelly, Aimee Doherty, Eabha Toole and Eno Okome put in a good performance in their heat finishing third missing out on qualification. Our U14 girls were easy winners of their heat but struggled in the final finishing 5th, a number of the girls doubled up on the day and their earlier efforts caught up with them.
The u14 boy’s team were quietly confident and they delivered on their promise with powerful running in their heat setting the fastest qualification time. The final was no different Tom Kilgannon getting the lads off to a great start, Matthew Buckley on the 2nd leg was sensational eating up the ground to give his team a commanding lead heading into the 3rd leg, Oisin Kelly consolidated the lead with a very solid run handing over to the anchor man Ben Toole. Ben maintained the lead with a very confident final leg crossing the line with a good 30m to spare over 2nd place.
Congratulations to all of our teams on some fine performances and best of luck to our three teams who have qualified for Nationals on March 28th. 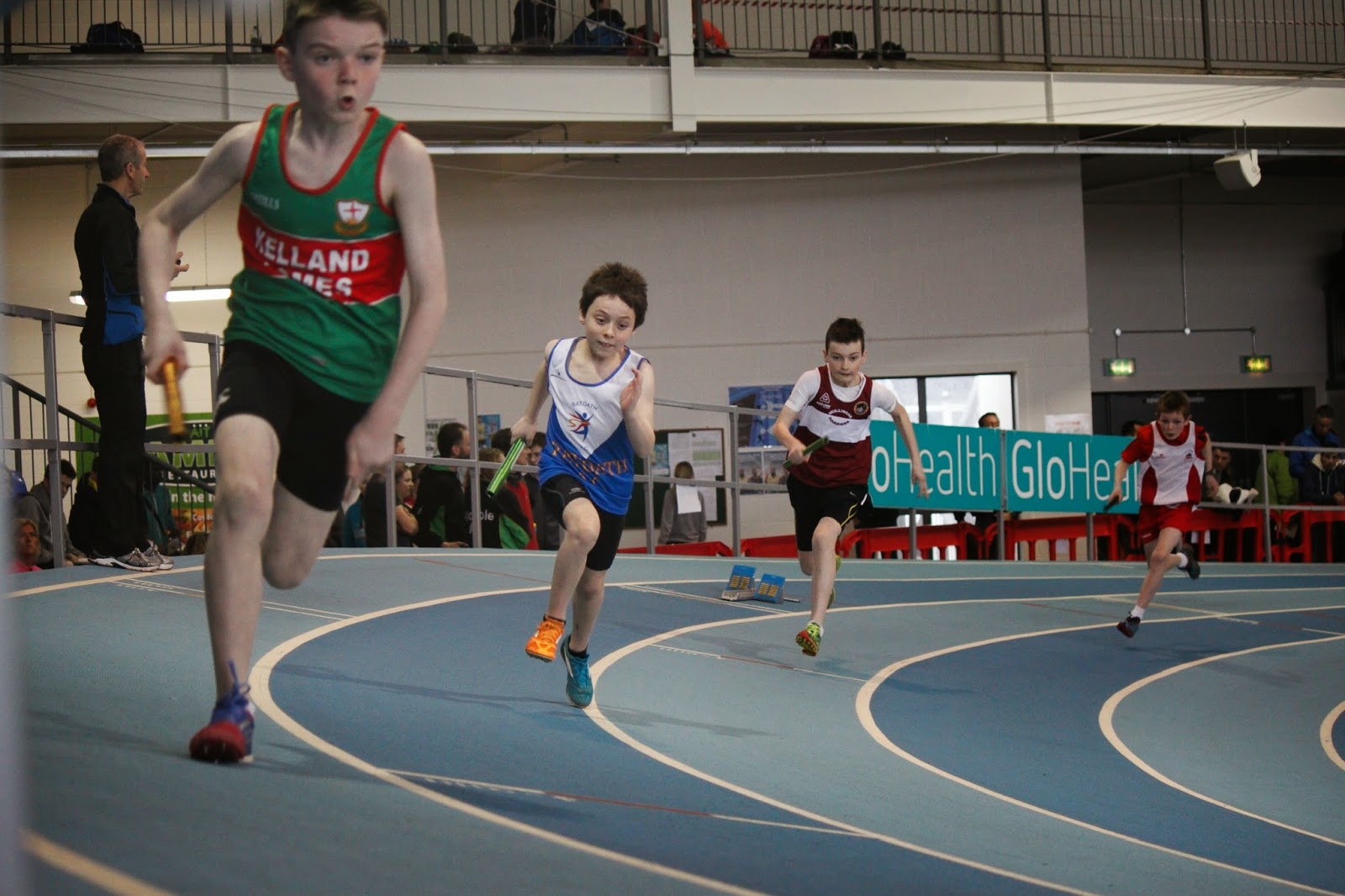 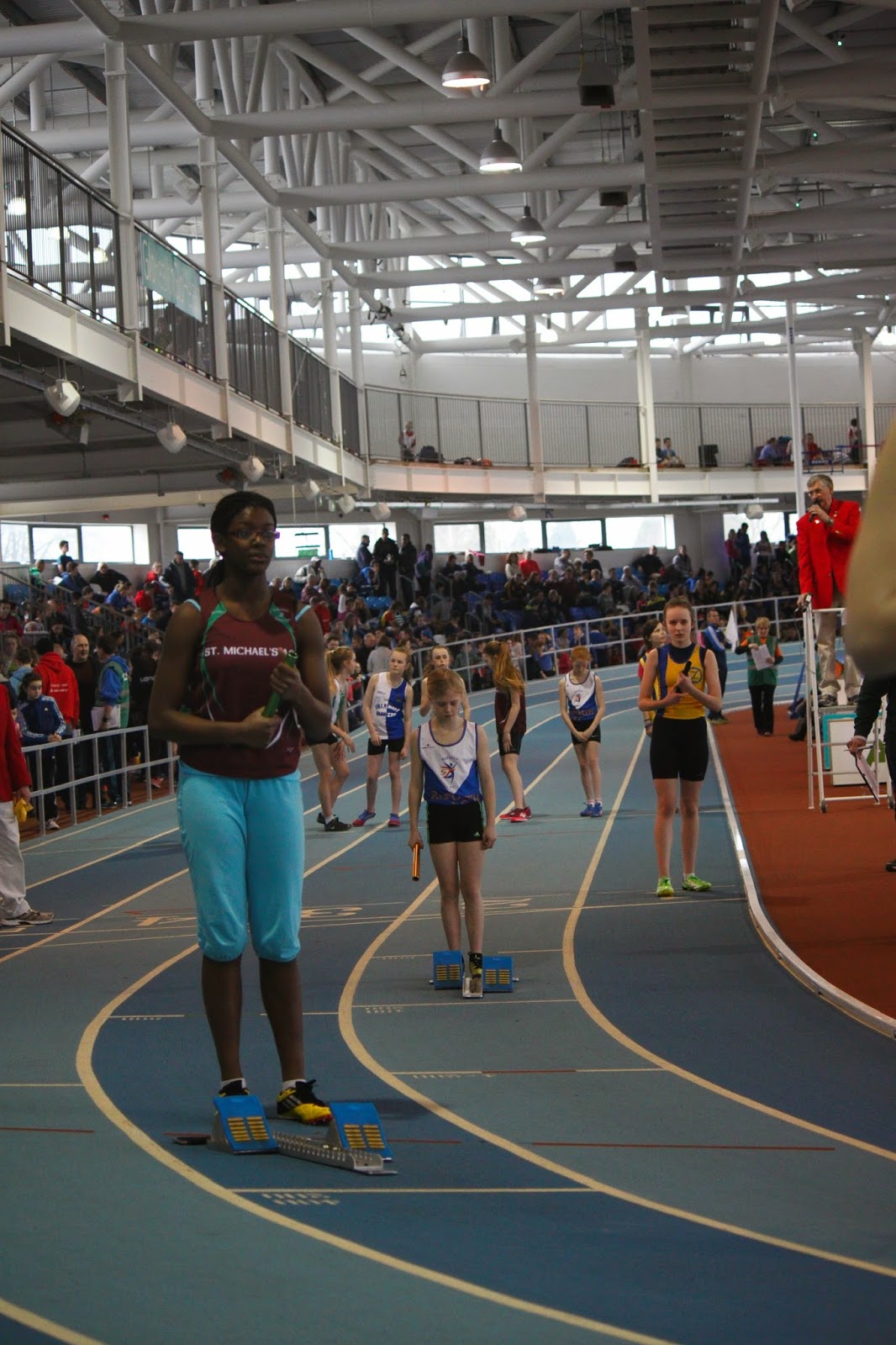 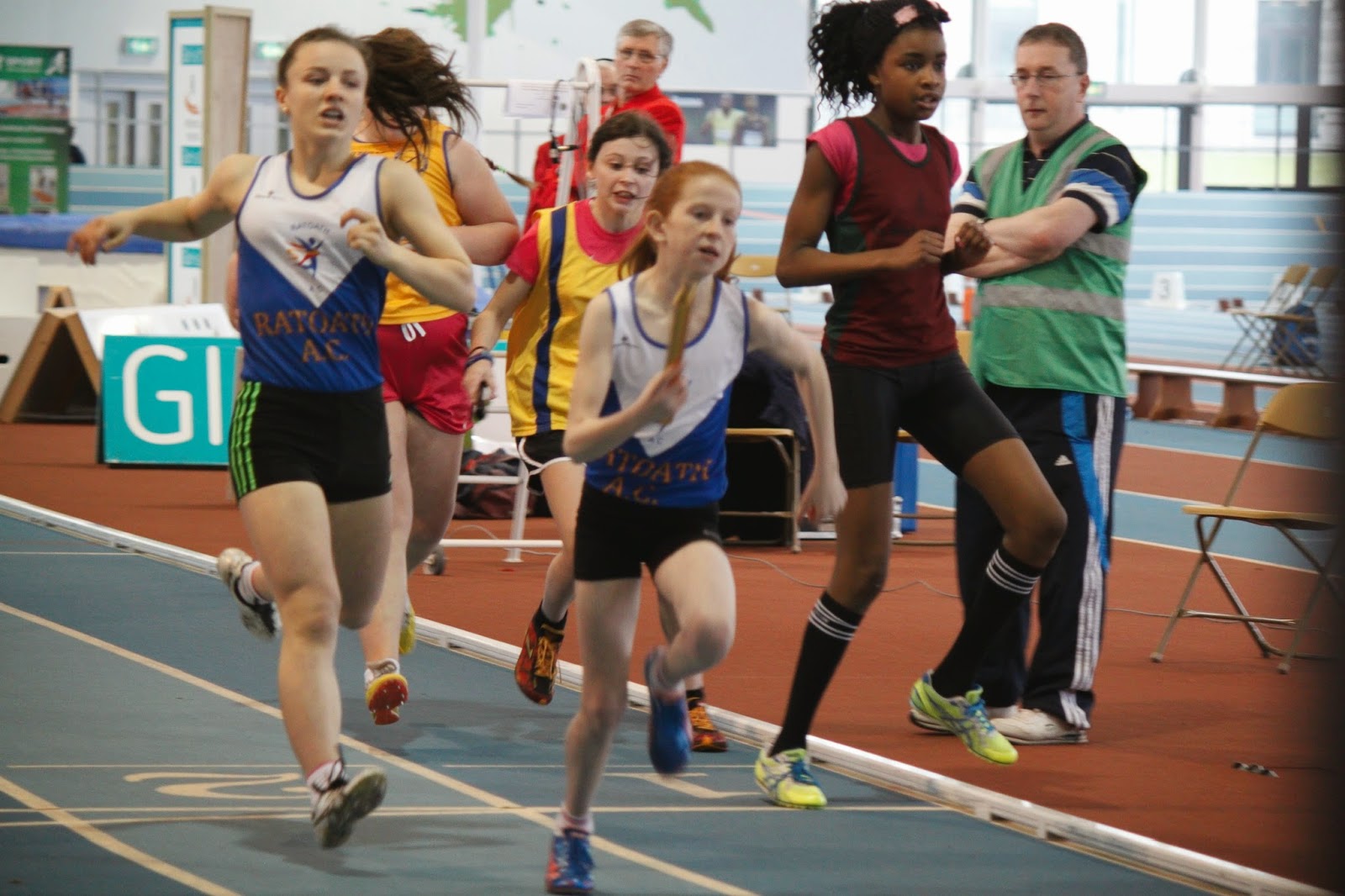 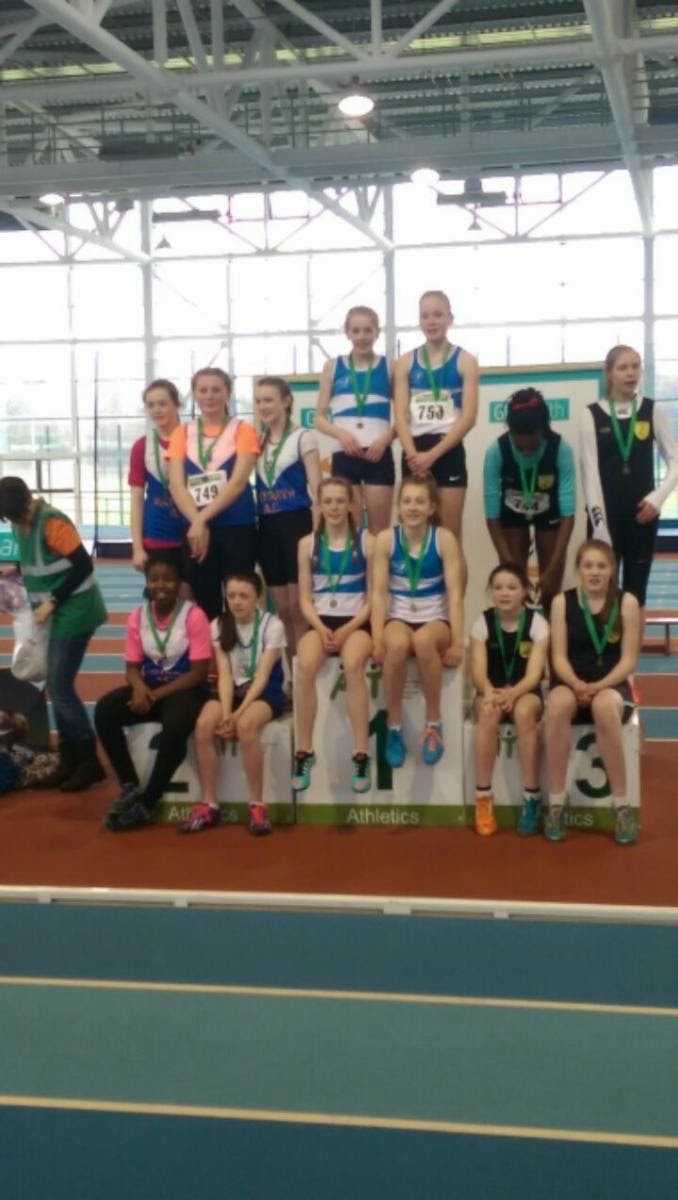 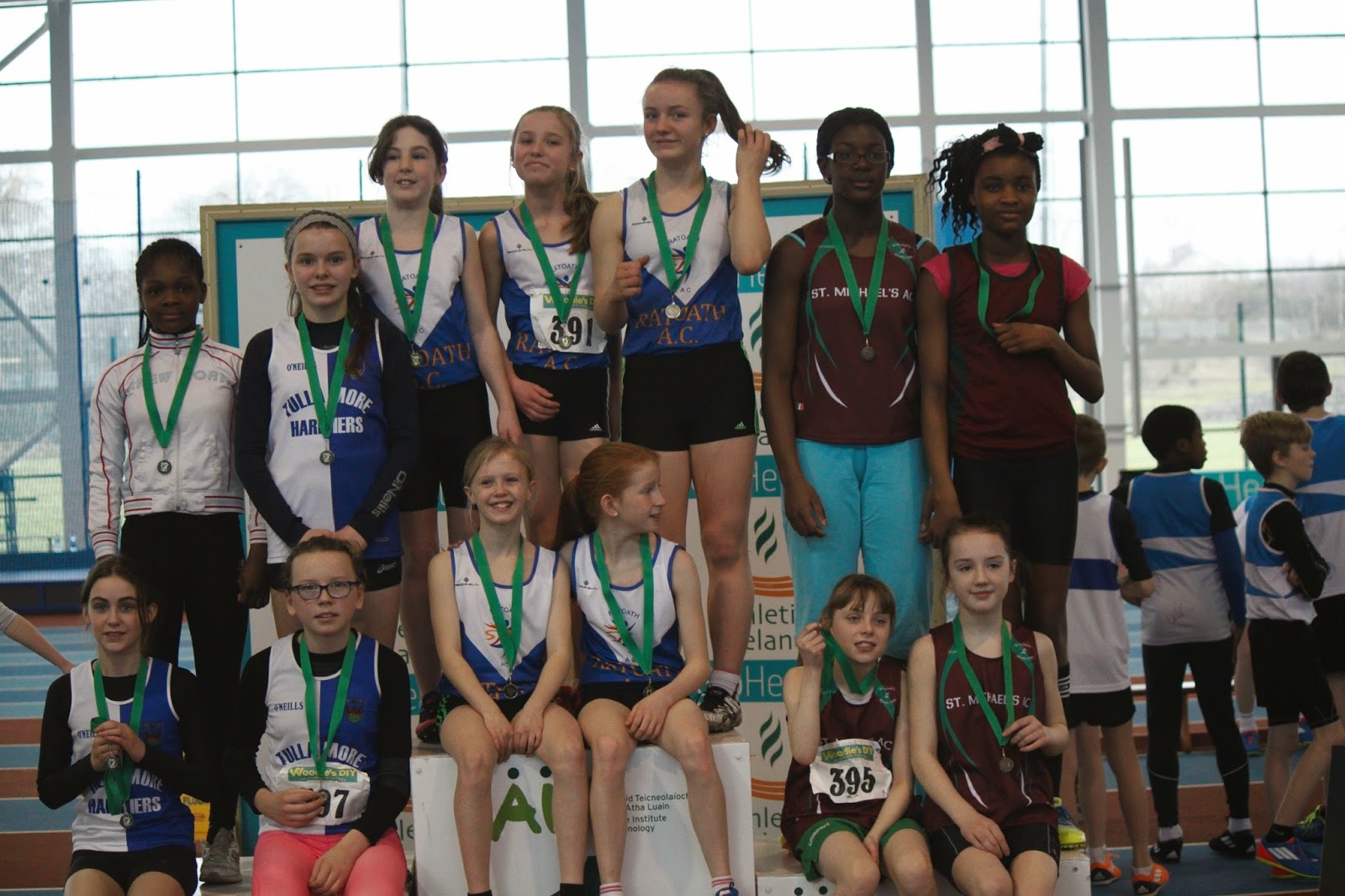 Posted by Peter Doherty at 9:57 PM