The All Ireland Master’s and Junior indoor championships were held over the weekend in Athlone, Abraham Zaidan and Eamon Wallace competed in the Junior men’s section and Peter Doherty competed in the masters. The junior championships were highly competitive this year, with an increase of 100% on last year’s entries, this was due of course to the new state of the art indoor stadium which is proving to be a great success and will be a great boost to athletics over the coming years. In the 60m event there was a record entry of 46 athletes, Abraham Zaidan was disappointed not to improve on his time of 7.31s from the Leinster Championships, and although he finished 3rd in the heat, it was not enough to make it to the final. Again in the 200m there was over 40 Athletes competing, 8 heats were required, with the top 6 fastest times making it to the final, Abraham again was well below form in this event and did not qualify for the final, the final was won by Marcus Lawlor of St. Laurence O’ Toole Ac in a new National record of 21.3s, a remarkable time for a junior.
Eamon Wallace concentrated his efforts at the weekend on the junior men’s 400m, again there was record entry for this event with over 30 athletes entered. 5 heats were required with the winner of each heat qualifying for the final and only 1 fastest loser spot available. Eamon drew a tough heat and could not afford to take it easy in qualification, he won the heat in great style with a time of 49.59s, 3 tenths faster than his previous PB. Eamon set the fastest qualifying time and this gave him a good lane draw for the final. Running in lane 3, he blasted off from the start and ate up the stagger on the Athletes in lane 4-6 by the time he got to the second bend, off the second bend he was 3-4 metres in front when the athletes broke into the inside lanes, he then stretched out the field on the back straight of the second lap and finished strongly with a comfortable 8-10 metre lead in a new pb of 49.41s, securing the gold and another national title. This was another great run by Eamon who has now put his stamp firmly on the ¼ mile event and we wish him the best of luck in the National Seniors indoor championships this weekend where he will rub shoulders with Brian Gregan and a host of other top Irish senior sprinters.
Peter Doherty competed in the 60m event on Saturday, and finished second to Paul McKee, a former Irish Olympian in a new pb time of 7.52 seconds, Paul set a new National record in the 60m with a time of 7.19s. 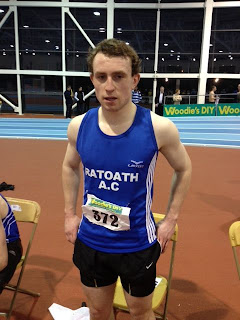