I had been looking forward to this race for months. Although I had also done the 8k (5mile) and 16k (10mile) races in the previous two months in the same park, I wasn't used to those distances. The HM distance seems to be (currently) where it's at for my racing, so I find pacing a bit easier.
So I did my final run of just 40mins on Thursday, but took it pretty easy. On Friday I did a bit of walking, but no gym and no running.
Saturday morning had me up at 7am to get breakfast in so it would settle in time. I had a gel about 15mins before the start and made my way to the wave 2 pen. Wave 1 was for sub 100mins, too ambitious for me yet! My PB was 1:50:04 and I was hoping for 1:48 or so, but at the last minute, I decided to aim for 1:45!! 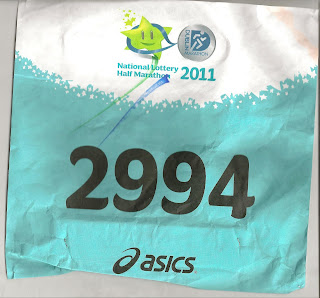 The elites took off, and a couple of mins later wave 1 went. Then we moved up and I was chatting to the 1:50 pacers and Siobheal, who I bumped into. In no time at all we were off and the 1:50 pacers were ahead of me! In the crowd (a total of over 8,000) it was tricky for the first couple of KM, but I caught up to my target pace pretty soon and pulled away from the 1:50 crowd. I decided to try and keep my pace pretty constant and it was feeling good. We were doing two loops of Pheonix Park and as we came up the hill to Chesterfield Ave around the 8k mark I started to run low on energy so I took a gel with water. In 10mins or so I was feeling ok again so I picked up the pace.
Most of the race went fine and I stuck to my pace but at about the 15k mark my right hamstring started to complain (an intermittent issue). It was so bad that I had to take a walk break for a bit and took in some water. Just then, a woman I had been talking to earlier was passing and told me to "get back running" - in a friendly way. I started running again and couldn't keep the pace I had been at, but ran as hard as I could. With the final hill I slowed a bit (as most of us did) and put on a spurt for the final 600m or so. Crossing the line I was limping, but very happy with my 1:45:30 time, woohoo!
I got my goodie bag, water and bananas and chatted to a couple of people before walking back to the car. I would normally have jogged, but I couldn't.
A well organized race and we got lucky with ideal racing conditions on the day.
Looking forward to the Dublin Marathon now!