I had been looking forward to this race for a few weeks since I had recovered from Connemara and was hoping to get a new Personal Best (PB) in it. Unfortunately I had strained my right hamstring a couple of weeks before, so I would have less training than I was hoping for. My leg was in constant pain on the day, but I was happy to tough it out and recover well after. 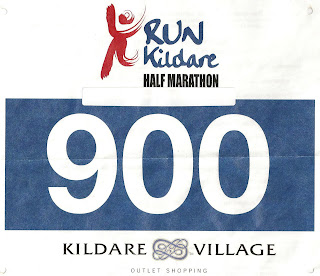 It was overcast on the day and had been raining in the morning, but it eased off during the race, although it was still pretty windy. The start was delayed to allow time for the incoming traffic to park up and the runners get to the start line. But in no time at all the gun went off and we started our course around the Curragh racecourse.
The course wasn't as hilly as some of the other runners had made it out to be, but after Connemara everything is a gentle slope! There's a course map and elevation here.
There were aid stations every 5k, and even some unofficial aid stations put on by the locals. I've never been offered a tea cake during a race before!
The atmosphere was very friendly and I chatted to lots of runners on the way. With about 4k to go I even met with Eimear (another club member) and she took off after a quick chat. I couldn't catch her with my leg feeling the way it did. I heard after that she finished about 3 mins before me - well done!
Coming to the end, seeing the grandstand at the Curragh was great and the last 1k was signposted with the distance left to go: 600m, 400m, 200m and then the finishing chute.
My official time was 1:50:04, another 5 seconds faster and I would have been under 1:50, arrgh! Not to worry, it was still a PB by over 1 min 30 seconds, so all was not lost. I would definitely do the Kildare HM again and am looking forward to it next year :-) 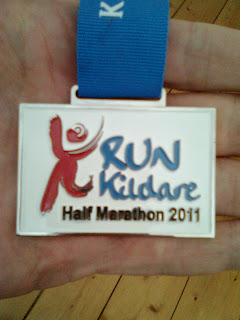 Email ThisBlogThis!Share to TwitterShare to FacebookShare to Pinterest
Labels: kildare half marathon